Biden is First President to visit Tulsa Massacre Town, a Century after white mob murdered Blacks on the Street and Burned Down Vibrant "Black Wall Street" 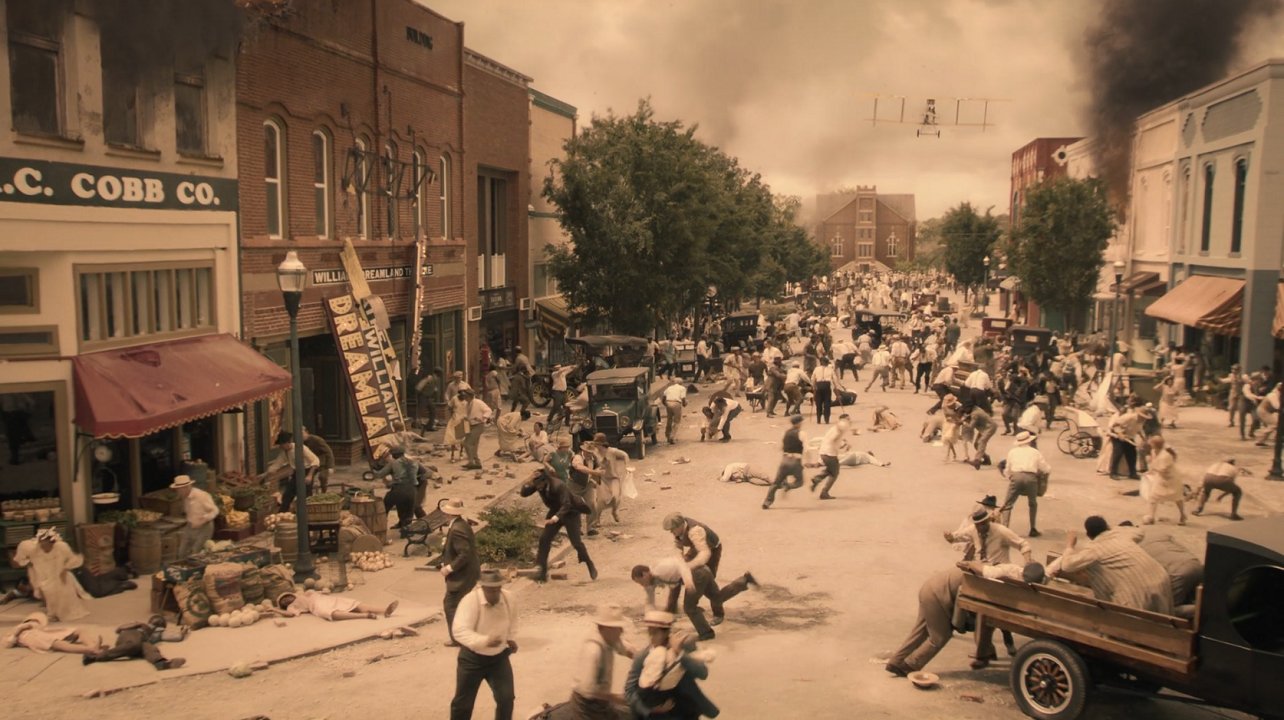 The once beautiful, safe, and prosperous town that included "Black Wall Street" was burned down as hundreds of residents were murdered by a white mob one hundred years ago. With a few exceptions, this shocking historic attack is not taught in US schools today.
Posted Wednesday, June 2, 2021 6:27 am
Diane Lilli

President Joe Biden is the first president in US history to visit the town in Tulsa, Okla. where a racist mob murdered black people and ravaged the prosperous town by fire.

The Tulsa Massacre was one of the largest racist attacks upon African Americans in US history, though you probably have never heard about the tragic event in US schools. About three hundred people were murdered by angry white men on June 1, 1921, in Greenwood, located in Tulsa, Oklahoma.  The mob also burned down the vibrant town and about 1,250 homes.

President Biden said, "This was not a riot. This was a massacre." 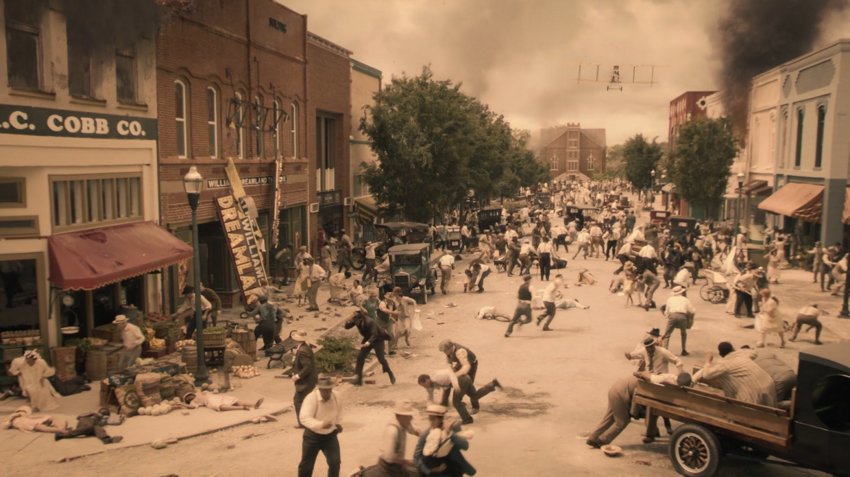 The once beautiful, safe, and prosperous town that included "Black Wall Street" was burned down as hundreds of residents were murdered by a white mob …

He told the crowd that bodies of one family, killed by the mob, were draped over a fence in front of their home. People were shot and killed praying or dragged through the street behind a truck.

Racial equality is a major issue for the president, and he released a major policy and order yesterday to the public, with specific programs created to help people of color in the US. Here is the information in full.

One hundred years ago, the thriving Black community of Greenwood in Tulsa, Oklahoma, known as “Black Wall Street,” was ruthlessly attacked by a violent white supremacist mob. An estimated 300 Black Americans were killed and another 10,000 were left destitute and homeless.

The destruction wrought on the Greenwood neighborhood and its families was followed by laws and policies that made recovery nearly impossible. The streets were redlined, locking Black Tulsans out of homeownership and access to credit. Federal highways built through the heart of Greenwood cut off families and businesses from economic opportunity. And chronic disinvestment by the federal government in Black entrepreneurs and small businesses denied Black Wall Street a fair shot at rebuilding. These are the stories of Greenwood, but they have echoes in countless Black communities across the country.

Because disparities in wealth compound like an interest rate, the disinvestment in Black families in Tulsa and across the country throughout our history is still felt sharply today. The median Black American family has thirteen cents for every one dollar in wealth held by White families.

Today, on the centennial of the Tulsa Race Massacre, the Biden-Harris Administration is announcing new steps to help narrow the racial wealth gap and reinvest in communities that have been left behind by failed policies. Specifically, the Administration is expanding access to two key wealth-creators – homeownership and small business ownership – in communities of color and disadvantaged communities.

Taking Action to End Racial Discrimination in the Housing Market.  The Biden-Harris Administration is announcing additional steps to end discrimination and bias in the housing market. More than 50 years since the Fair Housing Act’s passage, access to wealth through homeownership remains persistently unequal. In his first week in office, President Biden issued a memorandum directing the U.S. Department of Housing and Urban Development (HUD) to address discrimination in our housing market. Today, the Administration is announcing that it is taking critical steps towards realizing the President’s directive.  HUD has now sent both its proposed rule on countering housing practices with discriminatory effects and its proposed interim final rule on the legal duty to Affirmatively Further Fair Housing to HUD’s Congressional authorizing committee in the Senate and the House of Representatives for review and will publish them in the Federal Register next week. These proposed rules will align federal enforcement practice with the congressional promise in the Fair Housing Act to end discrimination in housing and will collectively provide the legal framework for HUD to require private and public entities alike to rethink established practices that contribute to or perpetuate inequities.

Additionally, the Biden-Harris Administration is taking on discrimination in home appraisals. A 2018 Brookings study found that homes in majority-Black neighborhoods are often valued at tens of thousands of dollars less than comparable homes in similar—but majority-White—communities. And the crisis is worsening: a recent study found that the gap between the appraised value of homes in predominantly White neighborhoods compared to comparable homes in predominantly Black and Latino neighborhoods nearly doubled between 1980 and 2015. The impact of these disparities in home appraisals can be sweeping, limiting homeowners’ ability to properly benefit from refinancing or re-selling their homes at higher valuations and thereby contributing to the already-sprawling racial wealth gap.

President Biden is charging Secretary of Housing and Urban Development Marcia Fudge with leading a first-of-its-kind interagency initiative to address inequity in home appraisals. The effort will seek to utilize, quickly, the many levers at the federal government’s disposal, including potential enforcement under fair housing laws, regulatory action, and development of standards and guidance in close partnership with industry and state and local governments, to root out discrimination in the appraisal and homebuying process. These are the kinds of policies and practices that keep Black families in Greenwood and across the nation from building generational wealth through homeownership.

Using the Government’s Purchasing Power to Drive an Additional $100 Billion to Small Disadvantaged Business Owners. The federal government is the largest consumer of goods in the world, buying everything from software to elevator services to financial and asset management, Federal procurement is one of our most powerful tools to advance equity and build wealth in underserved communities. And yet, just roughly 10 percent of federal agencies’ total eligible contracting dollars typically go to small disadvantaged businesses (SDB), a category under federal law for which Black-owned, Latino-owned, and other minority-owned businesses are presumed to qualify. Increasing federal spending with these businesses will help more Americans realize their entrepreneurial dreams and help narrow racial wealth gaps. In 2019, for instance, the gap in business ownership between Black and Latino households, relative to White households, accounted for 25 percent of the overall racial wealth gap between these groups.

Today, the Biden-Harris Administration is launching an all-of-government effort to expand contracting opportunities for underserved small businesses across the country. At its center is a new goal: increasing the share of contracts going to small disadvantaged businesses by 50 percent by 2026—translating to an additional $100 billion to SDBs over the 5-year period. To achieve this goal, agencies will assess every available tool to lower barriers to entry and increase opportunities for small businesses and traditionally-underserved entrepreneurs to compete for federal contracts. The impact could be historic: all told, attainment of the new goal will represent the biggest increase in SDB contracting since data was first collected more than 30 years ago.

Detailing the President’s Proposal for Historic Investments to Build Wealth and Opportunity More Equitably, Including in Communities of Color. Today the Biden-Harris Administration is also releasing new details of President Biden’s American Jobs Plan, which will make historic investments in building wealth and opportunity in Black and other communities of color. The American Jobs Plan will:

The Community Revitalization Fund will:

The program will begin to correct past harms and reduce pollution, create more public and green spaces, support local businesses, increase job opportunities, and lay the groundwork for more equitable transit systems and affordable housing solutions. The “Highway to Boulevards” movement has already seen 18 U.S. cities either replace or commit to replace a freeway with more urban and accessible streets. Cities like Rochester, NY, have chosen to remove dividing highways and replace the highway with infrastructure that has revived and reconciled neighborhoods decades later. President Biden’s proposed investment will fund and accelerate reconnecting neighborhoods across the country.

In addition, the Department of Transportation will establish a new Thriving Communities program to support communities by eliminating persistent transportation barriers and increasing access to jobs, school, and businesses. This initiative seeks to invest $5 billion in historically marginalized communities and bring everyone to the table to ensure that more communities have clean, robust, and affordable transportation options, including high-quality transit, equitable neighborhood revitalization, and other enhancements to improve neighborhood quality of life and address climate change.

Communities that qualify for implementation and investment awards will have access to flexible funding that help support public services in neighborhoods where new affordable housing is being developed and that benefit all community members. The goal of these efforts will be to increase the production of affordable housing, expanding access to good jobs and powering inclusive economic growth.